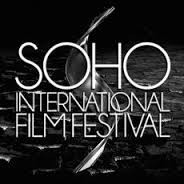 WHAT: Opening Day Meet-And-Greet with Filmmakers at Premiere of the 2015 SOHO International Film Festival

WHEN: Thursday, May 14th from 3:00PM-6:00PM continuing throughout the night and up to Thursday May 21st each day at selected times visit www.sohofilmfest.com for full details.

WHY: The SOHO International Film Festival, which proudly carries the “Made in NY” logo from the NYC Mayor’s Office of Film, Television and Broadcasting is a vehicle to help the economy of the city, enhancing the festival’s sense of pride while boosting filmmaking and tourism in the Big Apple. They are dedicated to celebrating the art of long and short form cinema created from the latest digital technology while still embracing the original goal and incredible storytelling. Founded in the epicenter of New York’s most artistic district, by Jorge Ballos in 2009, the festival is has provided a unique and powerful platform for filmmakers to gain exposure and potential distribution. SIFFNYC is committed to exhibiting domestic and international films, focusing on dynamic, visionary cinema that creates extraordinary experiences.

HOW: For credential requests, please contact Rick Eberle at 516-729-6872 or email rick [AT] rickeberle.com

Festival Brings Top Independent Films, Writers, Producers, Directors and the Stars that make them to a Discerning NYC Film Audience

Among the many titles in this years competition will be the NY Premiere of Darrett Sanders Mystery/Comedy “Kill Me, Deadly” starring Kristen Vangsness, Joe Montegna, Lesley-Anne Down and Paul F. Tompkins of VH1’s “Best Week Ever”, preceded by

Adding to the excitement of the event, many of the selected films will hold Q & A sessions with cast & crew members following each screening; along with panels, social events, and other networking opportunities for everyone involved. Leading figures from all disciplines of the film industry including distributors and media will also be in attendance.

Known for bringing the most influential titles in indie cinema, short films and documentaries from countries such as Australia, India, Nepal, Canada, Australia, France, Croatia, Germany, Hong Kong, Japan, Philippines, Puerto Rico, Spain, Turkey, U.K., and of course, the U.S. to their patrons, the festival will be screening several World Premieres like Australian gangster dramedy “Hangry” by Dir. Sophie O’Connor, starring Chris Broadstock and Eddie Coupe alongside Director Brendan Gabriel Murphy’s Comedy “Lucky Number” with Tom Pelphrey and actor/rapper Cliff “Method Man” Smith. Other high profile premieres include SOHO Film Fest alumni, Guy Davies with his film “Sick To My Bones”; Jillian Corsie’s documentary “Trichster” about the disorder trichotillomania; a directorial debut short by well-known Canadian actress Gabrielle Miller and John Gallagher’s “The Networker” featuring stars Sean Young, William Forsythe, Stephen Baldwin and Alysia Reiner; other premieres include Director Steven Hurst’s “Busted”- an Australian drama about a man building up the courage to chase the woman of his dreams, starring Allister Chick and Emma Monk; Rick McFarland’s “Highway To Dhampus” shot in Nepal with Rachel Hurd-Wood, Gunner Wright, Suesha Rana, Raj Ballav Koirala; and Elias Plagianos’ “The Man From The City” with Robert Clohessy and “Blade Runner”s Sean Young. “Every year, the festival attracts more premieres and this year is not an exception. This is a true testament on the trust that the filmmakers put upon our festival and what drives us to do whatever it takes to provide the indie filmmakers a proper stage to showcase their film.” says Sibyl Santiago, Executive Producer and Head of Programming for SIFFNYC. :  “We pride ourselves in being a filmmakers’ festival.”

The SOHO Intl Film Fest celebrates the cutting-edge of digital technology while honoring traditional forms of storytelling, encourages new and seasoned filmmakers from here in New York City and around the world to create and send in their fresh and innovative cinematic pieces.

2015’s Filmmakers and Titles include:

Can’t Make It To L.A For The Academy Awards? Celebrate Hollywoods Biggest Night of The Year, Honoring Rocky’s Own Burt Young At Taste Of The Oscars!